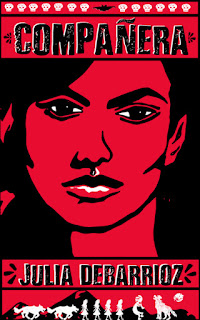 Today, we have Julia DeBarrioz, author of Compañera.

Marginalized young women have a tendency to disappear in New Mexico. PCT Bounty hunter Dakota del Toro knows the local vampire coven and their pet werewolves are to blame, but the badge she carries means she requires pesky things like admissible evidence and warrants to act—however when a bereaved mother comes to Dakota for help in recovering her daughter from the Lobos Diablos gang this bounty hunter will risk her career, her freedom, and her very life to bring Pilar Guzmán home.


1.       What inspired you to write Compañera and what is the significance of the title?

Dakota del Toro is a character whose story I have been carrying with me since I was just a teenager, and I’m in my thirties now. She’s tough but goofy and always sticking her neck out to try and do the right thing.
The plot of this book examines the vulnerability of undocumented immigrants, particularly women, to sex trafficking. In this story vampires and werewolves are to blame, but it’s sadly an allegory for our own world which is too full of real monsters who prey on women. You can read harrowing stories about it with just a few clicks on Google. According to the ACLU “In the United States, victims of trafficking are almost exclusively immigrants, and mostly immigrant women.”
The title Compañera refers to Dakota’s involvement in a revolution that promises to put an end to the abuse of women, at least in the vampire world.

In a couple ways, if I may toot my own horn. I know my book embraces some tropes but I hope it’s presented in a fun and original way. I’ve found it’s fairly hard to find a good vampire series that centers on Latino and Iberian culture. So, I write what I want to read. If you have any recommendations for a book I’ve missed I’m all ears!
I also feel like my book stands apart because I work in the antique business, and I have a good understanding of what life was like "back in the day". I’m familiar with the objects they used, the cultural values, the society norms, etc., and I think it gives me some insight into how someone who was born in say 1601 might behave in this modern day. I love thinking about how someone that old would have so much wisdom and insight in many ways, yet be so lost in others.

This book falls into the urban fantasy genre. There are elements of vampires and werewolves and magic, but it’s set in the recognizable world of Santa Fe, New Mexico.

4.       What are the intended goals of the main characters?

Dakota is a bounty hunter for the Preternatural Control Team. Basically there's a lycanthropy epidemic and it’s her job to bring infected people in for treatment before they turn furry and pose a threat to society. But she has a side mission to bring home these missing women that she knows have gone missing because of the vampires and werewolves, and she's willing to break the rules to do it. She meets a man along the way who on the surface seems like a nice normal human gallery owner, but as it turns out he's not what he seems and his goals are very similar to her own.

5.       What are some of the main issues that you explore in this book and why did you explore them?

As a female I suppose women’s issues have always been of foremost interest to me. I’ve been very fortunate, but I think it’s important to understand the lives of those who haven’t had as many advantages. As I was writing this the #metoo movement exploded, and it was hard not to feel some vindication in that. Like finally, our time has come. It's something that's been boiling under the surface for all of us in all walks of life.

I suppose first and foremost I hope my readers will be entertained! And at the same time, maybe walk away with a bit more awareness of these issues, and I hope more empathy too. Empathy is something I think we could use a whole lot more of these days.

8.       If your book would be turned into a movie, who would you imagine playing the part of the main character? (Actor can be ANYONE, living or dead.)

Oh dear. I think every author has a running cast list in their head for their book, ha! I think Cote de Pablo would play an amazing Dakota del Toro! And maybe…Maluma and Antonio Banderas c. 1995 as supporting actors? Hee hee…

I am always working on a handful of things, my muse bounces around like a ping pong ball. Right now I’m buttoning up edits for Dakota del Toro #2, as well as working on a spinoff story set in 1860s California featuring a bandido and a vampire slayer.

10.   And, finally, what do you think is in store for the future of Latino literature?

I think that any art based in such a vivid and complex culture can go nowhere but up!

Posted by Book Club Reviewer at 7:58 AM