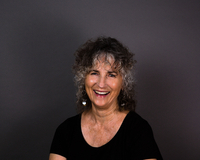 Born in Edmonton. Raised in Calgary. Currently living in the SF Bay Area. A high school dropout and a mother at 17, in my early years, I supported myself as a stock girl in the Hudson’s Bay Company, as a long distance operator for the former Alberta Government Telephones, and as a secretary (Bechtel Corp sponsored me into the States). I also was a cocktail waitress at the Fairmont Hotel in San Francisco; briefly broke into the male-dominated world of the docks as a longshoreman (and almost got my legs broken); founded and managed a homeless shelter in Marin County; co-created THE STORY SHOPPE, a weekly radio program for children that aired on KTIM in Marin County; and eventually earned two Master’s degrees (one in Creative writing and one in the Humanities). I’ve published reviews, interviews, short fiction, poetry, travel pieces, essays, and memoir in over 150 American and Canadian venues. Fling!, one of my novels, was published in July 2015 by Pen-L Publishing. Bone Songs, another novel, will be published in 2016. My poetry collection All This was published in 2011. You can learn more about me at my blog: lilyionamackenzie.wordpress.com. 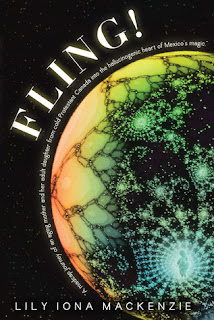 FLING: When ninety-year-old Bubbles receives a letter from Mexico City asking her to pick up her mother’s ashes, lost there seventy years earlier and only now surfacing, she hatches a plan. A woman with a mission, Bubbles convinces her hippie daughter Feather to accompany her on the quest. Both women have recently shed husbands and have a secondary agenda: they’d like a little action. And they get it.

Alternating narratives weave together Feather and Bubbles’ odyssey. The two women travel south from Canada to Mexico where Bubbles’ long-dead mother, grandmother, and grandfather turn up, enlivening the narrative with their hilarious antics.

In Mexico, where reality and magic co-exist, Feather gets a new sense of her mother, and Bubbles’ quest for her mother’s ashes—and a new man—increases her zest for life. Unlike most women her age, fun-loving Bubbles takes risks, believing she’s immortal. She doesn’t hold back in any way, eating heartily and lusting after strangers, exulting in her youthful spirit.

Readers will believe they’ve found the fountain of youth themselves in this character. At ninety, Bubbles comes into her own, coming to age, proving it’s never too late to fulfill one’s dreams.


I think it began because I was curious about my mother’s mother, someone I had never met. My grandfather, a former Scottish schoolmaster, had immigrated to Calgary, Canada, hoping to find a better life there for himself and his family. Meanwhile, WWI broke out, and his wife and four kids couldn’t join him for seven years. When they did, my grandmother couldn’t adjust to the brutal winters or to her abusive husband. After being there a year, she moved out, refusing to put up with my grandpa’s meanness, and became a housekeeper for a wealthy family. The story is that her boss took her to Mexico with him. She never returned. I wanted to try and recreate what life might have been like for her once she left Canada, and that then brought in a number of other characters that inhabit the novel.

2.     Can you please describe the relationship between Bubbles and Feather?


As with many mothers and daughters, it’s a complex one. Abandonment is a theme that runs through all of the female characters’ lives in Fling! That sets up a dynamic of mistrust and recriminations. These things surface in the novel as each woman comes to a new understanding of her relationship with her mother.


3.     What was the hardest part about writing this book?


Finding the right voice. When I first started working on the novel, I wanted to write a lyrical narrative, but the characters refused to be portrayed in that way. They were feisty, zany, comical. So I had to adapt my approach to their stories by letting them show me the way. The results are what Lewis Buzbee, professor of creative writing in USF’s MFA program, calls the madcap journey of an aging mother and her adult daughter from cold Protestant Canada into the hallucinogenic heart of Mexico's magic, where the past literally comes to life.  Every page is a surprise…”

4.     What do you hope readers will gain from your book?


Deeper insight into the complexities of family dynamics. Every family is different, of course, but each one has secrets and buried stories. Bringing those things to the surface can be healing, just as they are in a good individual therapy or psychoanalysis. As Lionel Trilling has said, novels read us as much as we read them. So I would hope that readers of Fling! might come to some new understanding of themselves. Also, some characters in the book are searching for the fountain of youth, and my belief is that it exists in the imagination. Without a fertile one, we are already dead.


I don’t think I was inspired to be a writer because that suggests a level of choice.  I am a writer.  Writing chose me. It’s as necessary to me as eating. If I don’t write, I’m cranky and irritable. Ask my husband!


I love entering new worlds and exploring new characters and making unexpected discoveries as a narrative unfolds. I never know where a work is going. It’s totally spontaneous. That’s the fun and adventure of writing. But it’s also one of the more difficult parts because I have to trust each time that material will surface, and I will eventually have a story to tell. The other thing I love about writing is revision. To me, that’s where the real writing happens. I already have something tangible to work with, so the fear of not finding my way is lessened.


I have so many that I’ll never be able to cover them all here! I love the Norwegian novelist Per Petterson and have read all of his books. I’ve also read most of Gabriel Marquez’s work. One Hundred Years of Solitude found me at a time when I needed a model for the magical realism approach that seems natural to me and inhabits much of my work. I love that book and return to it often for inspiration.
In another mode, Roberto Bolano, a Chilean writer, has also inspired me. He diverges from the more familiar magical realist vein and creates his own genre. I’ve read most of his books now, and they construct a world that seems like a parallel universe to ours. He also steps beyond the usual fiction boundaries, violating our expectations of how a novel should unfold or end. I’m always entranced by his work.
And I haven’t mentioned W.G. Sebald yet, another writer who died far too young. He’s also invented a new genre, a hybrid novel form. Again, I’ve read all of his work, and I’m stunned by it.
I’m sorry that all of these authors are men when there are so many female writers I love as well. How can I not mention my countrywoman Alice Munro? Or Irish writer Anne Enright. I’ll read anything she writes because of her sharp wit and illuminations of contemporary life.

8.     If your book would be turned into a movie, who would you imagine playing the part of the main character? (Actor can be ANYONE, living or dead.)


No actors come readily to mind, I’m afraid. Bubbles and Feather and all the rest are so distinctive to me that it’s difficult to imagine someone being able to inhabit their characters.


It’s hard to describe a latest project since I’m usually working on more than one thing simultaneously. I’m revising my novel Bone Songs that will be published in 2016. I’m also working on a novel whose focus is Tillie, a younger version of the main character in another novel of mine, Freefall: a Divine Comedy. Its title is Tillie: A Portrait of a Canadian Girl in Training. There’s a novella I’m about two thirds of the way through, The Sinner’s Club.  And I have several short stories in process.

10. And, finally, what do you think is in store for the future of Latino literature?


Since my fiction has been so influenced by the Latino sensibility (I haven’t mentioned here all of the Latino writers that have helped shaped my work), I can only hope that it will continue to flourish. It has such distinctive voices. I’ve already mentioned Roberto Bolano, but there are many more I could name if there were the space. I think each Latino writer I’ve read is unique in his/her approach to narrative and offers a rich vein for readers to explore.

Posted by Book Club Reviewer at 8:29 AM