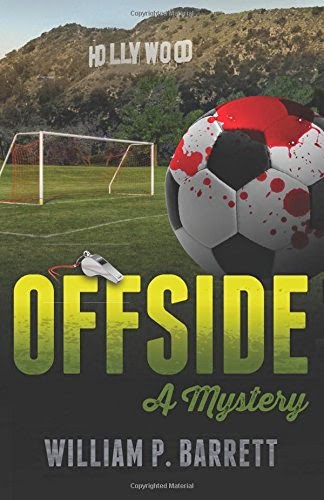 In 2006, amid the great real estate bubble, Rick Hermannik, an adult referee of youth soccer, is found murdered in a ritzy Los Angeles suburb, his whistle left in an unnatural place. Suspicion quickly falls upon volunteer coach Diego Diaz, a one-time gang member whose hot Latino rant over an offside call pops up on YouTube. The media eagerly pursue the delicious story line of out-of-control soccer parents. Case closed–until the boyfriend of Diaz’s grown daughter, Hector Rivera, a former high school soccer star but now a college dropout in a dead-end job, tries to figure out the truth, and himself.


Review: Witty and frank, Offside is an intriguing mystery with a solid in-depth base of history, politics, pop culture, and, of course, soccer. Soccer seemed to be the central theme, and why wouldn’t it? It’s vital to Latino culture. But not being a sport buff, it was a little much and a tad confusing at times.


Barrett paints a true landscape of the SoCal scene and he does so with such brutal finesse. The Mexican cultural references and historical facts were a great value and only enhanced the Latino awareness.


Although slow at capturing my interest, the book illustrates the writer’s impressive skills. He cleverly explores poverty, racism, and other socio-economical issues that Latinos face today. It’s enlightening and thought-provoking. The book is almost suitable for a Chicano Studies class; portions of it can be printed in textbooks. The story, however, was not as great. I felt like I was waiting for the mystery. Also, the variety of characters made it hard to keep track of the story.


It was evident that the author had vast experience and knowledge in police protocol, government, politics, pop culture, and sports, but I felt that it all depleted the energy from the story. Overall, this was an okay first novel.


Posted by Book Club Reviewer at 8:28 AM